I wanted to post a quick picture of all my princess castle blocks sewn together. 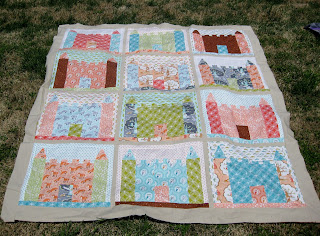 I've actually had them all sewn together for quite a while now but I haven't wanted to post them because I haven't decided what to do for a border yet. The pattern calls for just 1 1/2" squares of all the fabrics but I didn't want to do that. I think at this point I may end up just doing an 1 1/2" pink border since I have to order backing fabric still anyhow. I haven't decided yet If I want to spring for a print backing or just do a solid. It's hard when you don't know where the quilt is going to live. Normally by the time a quilt is this far along I know if Im keeping it, giving it away, donating it, whatever and then it's easily to choose finishing options. I haven't even begun to think of quilting! 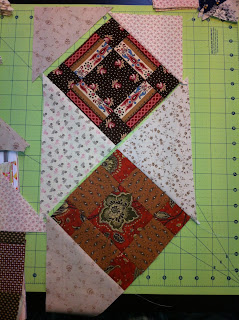 I started piecing my uneven nine-patches into columns last night and I just wanted to share a quick picture to show you how that's done on the angle. In the beginning I kept second guessing which way to sew on the setting triangle but now I've got the hang of it and it's going together pretty fast. I haven't bought the black fabric that is used for sashing between the columns yet, but I'm hoping to find something that will work for that this weekend and maybe get the quilt center together. Then I just have to make 144 Flying Geese.
Posted by QuiltingRage at 7:38 AM