You may remember the foundation pieced pineapple block that I shared with you a little while back here. Well, I FINALLY made all 8 blocks and got my top together! 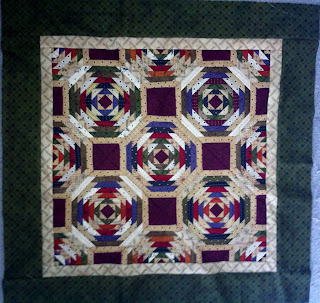 Here it is! To make my pineapples be on point I had to leave 5 blocks whole and then cut 2 in half, and 1 into quarters. For as long as it takes to make each pineapple with the little teeny strips that only finish at a half inch it was really hard for me to cut them at the end but I think it needed to be on point to give it more interest. I had not intended to put a border on this quilt but when I got it together it really needed it. It might be a while before we see this quilt again because I might have a go at hand quilting it since I already have so much time dumped into it and it's pretty small. It is a 28 inch square. 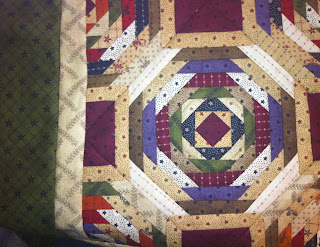 Lets All Do The Lumbar Limbo

I had to have a lumbar puncher (I would like if they just call it a spinal tap but I guess that's not the medical term anymore) last Wednesday and it put me out of commission. I had some minor complications so I've spent the week on the sofa and in bed. Today is the first day I was able to make it up the stairs to my sewing machine and computer.  Therefore, I regretfully have nothing to share with you, however I did do about a half hour of sewing on one of the pineapple blocks today and I think I should be able to jump into more tomorrow so hopefully I will be back to full speed soon and have something cool to share.
Posted by QuiltingRage at 5:24 PM No comments:

I'd like to apologize in advance because this is going to be a long and picture heavy post. Hold in there team!
In the coarse of a week I order not one but TWO of the 12 pound grab bag boxes from the Fat Quarter Shop!( You can find them here although I will warn that they are sometimes sold out) I love scrappy quilts and scrap fabric and I thought that it would be a great way to get some fabric that's adorable but that I might not typically buy for my stash. They were on sale for for $55.99 and then it's $10 shipping. I figured for $65 bucks even if I flunked out it wouldn't be the end of the world and I could still sleep at night. Unfortunately I did not take pictures of all of the first box of fabric (I'll talk more about that later), but it did take complete photos of the second box! 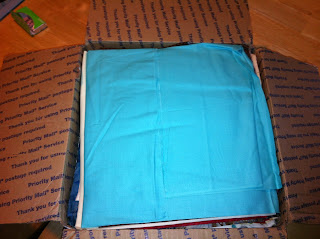 This is how the box comes. Filled to the absolute brim! 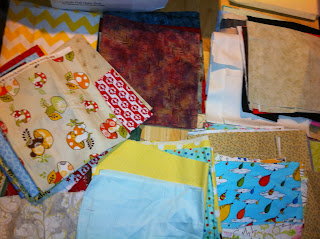 Here is everything that came out of the box. 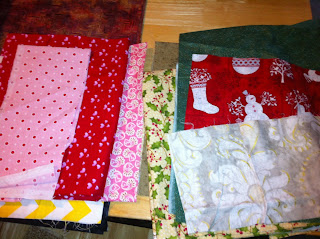 There were some Valentines day fabrics, which I thought was interesting since it's June, and some Christmas fabrics, more understandable. 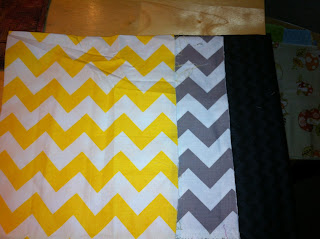 A couple cuts of Chevron which I love! ( I also got some Chevron prints in the first box) 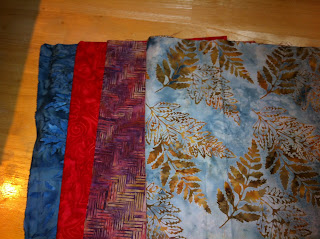 A couple batiks. I personally don't use batiks but I will say I like the one on top. My bedroom has blue-grey accents. 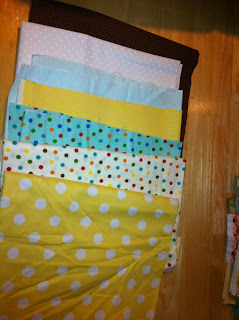 A bunch of polka dots, which was a little funny because my guild just announced this week that they are doing a polka dot challenge! Everyone makes a polka dot quilt and we put them all in the quilt show and then donate them to Linus when the show is over. I have to start brainstorming amazing polka dot quilts so I can show off! 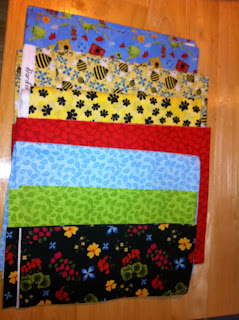 I got a lot of this Garden Frolic fabric. Whats interesting is that I got the exact same cuts of the exact same fabrics of this line in both boxes. I think they must have been part a quilt kit or something that got de-assembled for some reason. Anyhow, between the two boxes I ended up with 7 1/4 yards of fabric from this line and I personally don't particularly care for it so I created a sellers account and put it up on etsy. I have such a hard time selling fabric but I know it would just sit on my shelf collecting dust and cat fur if I didn't find it a new home. Plus hey, if I can recoup a little bit of the cost of the box that's cool too! 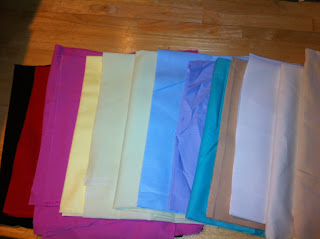 I got a lot of solids in the box. That's good for me because I don't have a big collective of solids like most quilters, I just buy as I need them. 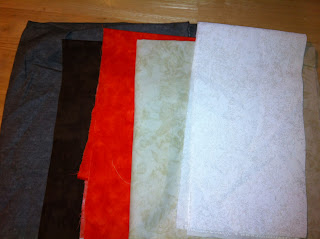 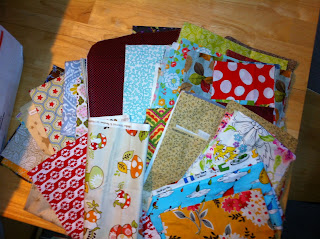 And here's everything else. Notice the adorable mushroom print! Months ago I had order 1 yard of a blue mushroom fabric from this line for some reason, so now it has a companion and is more likely to get used.

Like I said I did not take pictures of the first box as i opened it and I've already shoved some of the fabrics into my stash so I can't give you a full representation of what was in my box (boo on me). That being said I really liked my first box better than my second. I just got more prints that are my style or matching parts of lines. So I want to share with you some of the picture of fabrics that came out of the first box anyhow, in the interest of full disclosure! 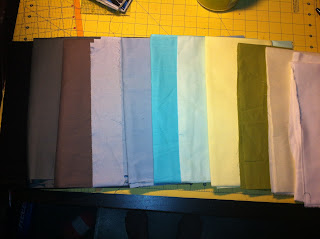 I got less solids in the first one (which some people might find apealing) and I like the colors I got better as well. I've been giving some serious thought to doing a quilt of solid grays and reds. 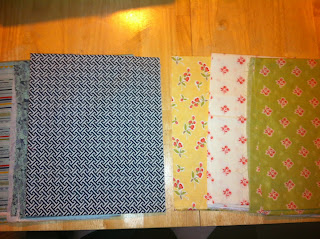 I was really excited to get a couple cuts of PB&J and Avalon because I love both lines and I already have charm packs from both lines. A little extra fabric is great to tie in a pieced backing or add a thin border. I also got a few cuts of the line Flirt which were pretty cute. 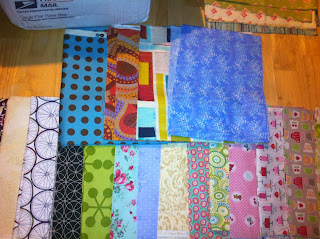 And these are some of the other prints that I really favored. The bicycle wheels are fun, the green star is very chic and who wouldn't love the little backed goods!

All and all I think I got my monies worth for both boxes. The cut sizes where pretty good in both boxes, most peaces being a little under a half yard, with a couple being only about 4 or so inches and some being well over a yard. I just like my first box better because I got more coordinating fabrics and more fabrics that I recognized. It's just luck of the draw I suppose. I will definitely do it again! It was a lot of fun and the anticipation of getting the box almost killed me! The one thing I will say I found interesting and perhaps a small bit disappointing, is that I read a couple blogs where other people had received their grab boxes and they were complaining that they got a lot of reproduction civil war fabrics and they would have rather had more of the modern fabrics and I thought to myself, "Oh boy! This is perfect for me because i love modern fabrics and civil wars so I'll have the best of it all." So, imagine my surprise when my boxes came and the first box did have 3 decent sized pieces of reproduction fabric but not what I expected and not what I had seen other people get. One of the reasons I ordered the second box so soon was because I figured maybe it was just what they were cutting that day and it was a fluke. Then the second box came and had NO civil war fabric! Not even a little sliver! I don't know what the deal with that it but like I said, I still feel like I got my moneys worth and I'm happy overall and feel good about the transaction and hope to do it again soon. If you have any questions about my Grab Bag experience please ask!

Posted by QuiltingRage at 6:36 PM 2 comments:

A long time ago I bought the Rapid Fire Hunter's Star ruler (in both the Petite and the Large size) at a quilt show. I had a failed go at making a Hunter's Star quilt once that used cut out templates and thought it might give it another go with this ruler. 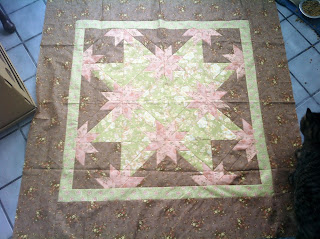 This is what I came up with. It is 52", which is bigger than what I had planned to make, but I like it. I think quilts along this size make excellent baby quilts because they are light enough to drag around and they make an excellent play mat. The fabric I've also had for a very long time. The line is "A Day in the Country" by Joanna Figueroa and Lisa Quan Fig Tree Quilts Moda.

The ruler was really easy to use. And this turned out SO much better than what my original go without the ruler did.
Posted by QuiltingRage at 5:59 PM No comments: