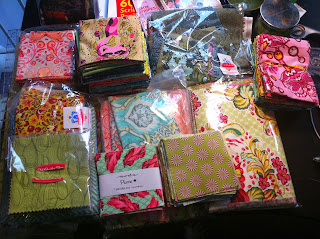 What you see before you is a mountain of Tula Pink fabric! I've been considering/planning to make the City Sampler since I heard that the book was coming out! I knew I didn't want to start it until after the release of Acacia because I wanted to include as many of her lines as possible. I have been hording her fabric like a lunatic in the mean time! Notice my prized Plume charm pack that I payed a silly amount of money for, but have never dared to open because I was saving it for just this occasion!

Why haven't I cut in yet. A few reasons really.
1) Some of this fabric I've been hording for so long as my precious fabric that I won't even considering using because I'm saving it, now makes me nervous to cut because I know I can't get more.
2) What if I get going and don't pick up momentum to get it done because Im starting so much later than everyone else? The official Quilt Along is already on block 63 out of the 100 blocks. No way to catch up to that! Although I suppose if I got 20 blocks or so along and ran out of steam I could just make a baby quilt and call it a day.
3) I have no idea what layout to do. This is the main reason I haven't started. A lot of the layouts require a lot of pre-planning because the colors have to lay in such a way. I keep saying I should just get started and maybe a few blocks in the blocks will tell me what they want to be. I just get a bit nervous about getting off to a bad start.

Hopefully I'll surmount these obstacles and be on my way soon!

I also have finished my  Polka-Dot Challenge Quilt for Linus but unfortunately their has been a lot of rain here so I haven't had a good opportunity to take a picture. My house has skylights so when it's cloudy it's very hard to get enough light for a good picture. Hopefully on Sunday, when I visit my in-laws I can use their clothes line to get a good picture if the weather is nice. That is wear I took the pictures of the Oriental Dreamweaver and I love how they turned out.
Posted by QuiltingRage at 2:13 PM