My Good luck minis are complete! 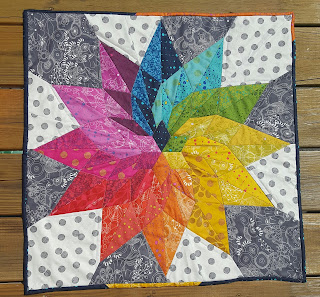 I kept the quilting really basic stitch in the ditch becuase i didn't feel like it needed anything else. the fabric is already beautiful. 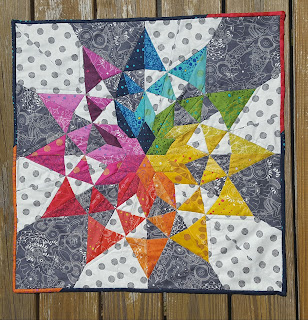 I did opt for a fun binding with pops of colors. 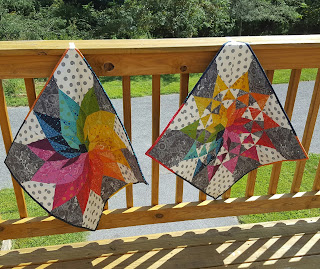 I really think these two will be a great start of a mini quilt collection. 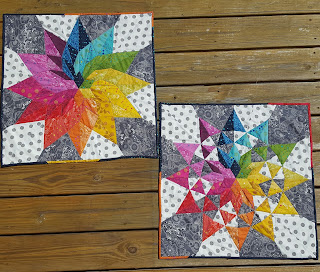 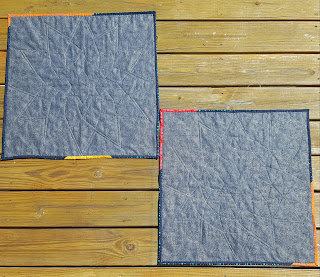 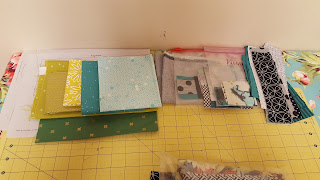 As mentioned before, I have two more mini quilts to make for swaps. Here is a sneak peak of what my work station looks like while I get these two off the ground. More on that soon!

As you know, we are getting ready to buy a new house in Pennsylvania where I will *hopefully* have a beautiful sewing room with a ton of space. I've decided that in my new space i want to have a mini quilt wall.  I've seen beautiful, wonderful, inspiring shots of other people's on instagram and it's given me serious envy! So in the mean time I've decided to start working on some mini quilts to take with me to the new house and set the tone. 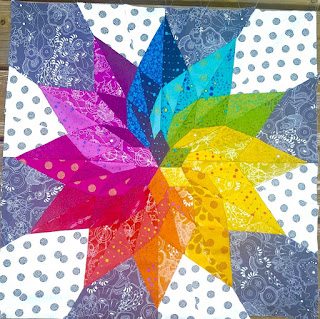 This is Good Luck Star! The pattern is available on craftsy. The pattern makes a 12" block but I couldn't see messing around with 24 fabrics (26 if you could the background prints) just to get a 12" block and I really wanted to showcase the beautiful fabrics, so I had the templates blown up 200%, so it's now a 24" block. It's made entirely of Alison Glass fabrics. I started with a fat eighth bundle of Sun Prints 2016 and then added from my stash of her other prints to fill in gaps in the color wheel and also to try to minimize how many time I had the same print touching. The pattern is designed to leave you with a whole in the middle of the block (because who can match 24 points? Certainly not I!) that the pattern has you applique a circle over. I don't like to put circles in the middle of stars, personally, because to me, it makes it read flower instead of star and I want a star. So i added the 6 pointed english paper pieced star instead. I was concerned about what laying a 6 pointed star over a 12 pointed star would look like but I think it worked out ok. 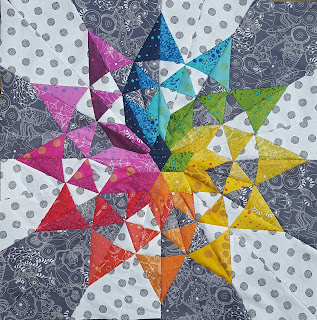 Here is it's companion block, More Good Luck. It is surprisingly the same template with just two extra lines. I made the same changes that I made to the first block for this block. Blowing up the block definitely upped the challenge more than i was expecting, just because the pieces where so large and cumbersome, but i think it was worth it. 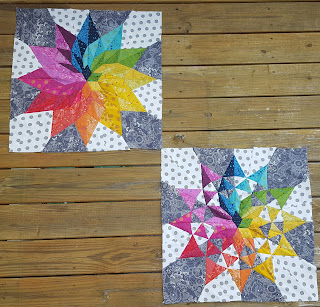 The pattern says that 12 pointed stars are suppose to bring good luck, so I'm hoping that taking these two beauties to the new house will be perfect! I just need to get them quilted and bound now!

I also joined two additional mini swaps (Have to fill that future wall after all). The Teal Swap, which uses the proceeds to benefit Ovarian Cancer, and the Quiet Play Swap on Instagram which is a foundation piecing swap. I'm sure you'll be seeing more on those as soon as i get my partner assignments and get started!

I have begun a new project! It will be a set of two star mini quilts made with Alison Glass fabrics. I have been collecting her fabric but really haven't done much with it, till now. 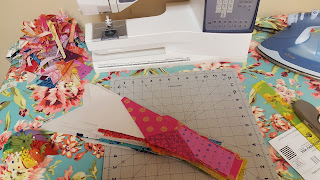 I have most of the piecing done for the first star already. I love the rainbow pile of little scraps that i got from trimming my wedges. 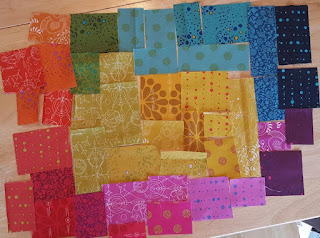 Speaking of scraps, I was playing around with some of the bigger scraps I had from cutting out this project and started to get really inspired. I now am starting to formulate a plan for this little pile of rainbow goodness. Of course this means that Im not any where near half way down my first project and I'm already obsessed with the possibilities here.

Hello! Long time no post! I've picked up my family and moved to Pennsylvania. We are in a rental until our Maryland house closes and we find a home to buy, so unfortunately in the meantime 90% of my quilting supplies and stash are in boxes and I only have a very small table in the basement next to the washer and dryer for my sewing machine and ironing. So probably not a ton of quilting coming my way in the next few months.

BUT I did manage to pull off these two pillows as a present for my sister birthday! 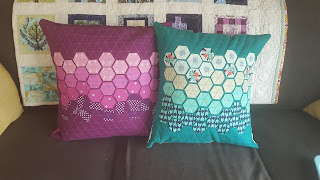 I originally saw this kind of hexagon pillows in an issue of Love Patchwork & Quilting quite a while back and I had it in the back of my head as something I'd really like to do at some point. So when I was searching for pillow ideas for my sisters birthday I came across the Modern Handcrafted blog and it reminded me I still had the magazine with that original pattern somewhere. Luckily, I was able to find that issue of Love Patchwork & Quilting in all my boxes! 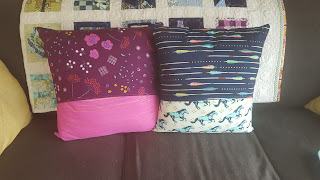 I used all Cotton + Steel prints except for one Alison Glass print in the purple pillow because despite ordering more purple Cotton + Steel fabric to try to fill that spot I was still unable to find the perfect shade/print. I thought tit was fun to back the pillows in mismatched fabrics. 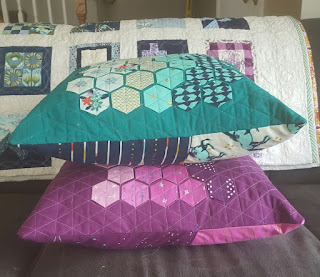 One of the coolest things about these pillows is the geometric quilting that complements the hexagons. I had a really hard time marking the my fabric because it was so dark and I wound up just using my pressure foot. My quilting isn't perfect but I always say if I wanted perfect, I'd go to the store and buy something made by a machine and save myself the time. We all know it would be cheaper too! Ha!

My sister seems to really like the pillows so hopefully they will gets lots of love! It was a nice little project to break in my temporary sewing space.

I am in preparation for a new project so hopefully I'll be back soon!